The Cost Of Terror

Till the 1970s and even till the mid 1980s we were in an age of innocence. People could walk into any building, govt or private, without being intercepted. There were no check posts, barricades, metal detectors or X-ray machines. There were no security checks at the airports even till the 1990s. At the most, air travellers had to identify their checked-in baggage placed outside the terminal before being loaded on to the aircraft. Residential societies didn’t have watchmen. The most they had was a night-watchman. There were no regular beat-cops in most places. All this changed only after the Kashmir ethnic-cleansing of KPs in early 1990 and then Kargil war, 9/11 and the attack on Parliament in December 2013. Today, almost every major building – govt or private, has security checks, metal detectors and electronic surveillance. There is a cost to all this – a heavy cost – to individuals, private and public entities and to the country as a whole.

PM Modi is not entirely forthcoming and accurate when he says the Army has been given a “free hand”. He has made this statement repeatedly and it is somewhat deceptive. What exactly is this free hand? That the army can do anything with no questions asked? Or does it mean that they can respond to a conflict situation as they deem fit? Does it mean they can undertake hot-pursuit of terrorists across the border? Does it mean the army can bomb or attack enemy assets and hideouts of their own free will? This is a grey area that the PM has introduced which mostly means nothing. The army cannot cross borders or attack enemy camps without Cabinet and govt approval. Secondly, the army is not protected from their acts of defence or punishment if this so called “free hand” is indeed a reality. The case of Major Gogoi, who used a human-shield for safe transit of his group, is a glaring example. He was littered with cases and HR bodies wanting him punished:

Major Gogoi was indicted in another case for staying with some person which is unrelated to the above incident. In yet another case, over 300 officers of the army had petitioned the SC to seek protection from FIRs being filed against them for actions during combat or conflict under AFSPA. This petition was filed out of “FEAR” of prosecution for actions that may be legitimate and sometimes excessive. In December 2018 the SC rejected their plea: 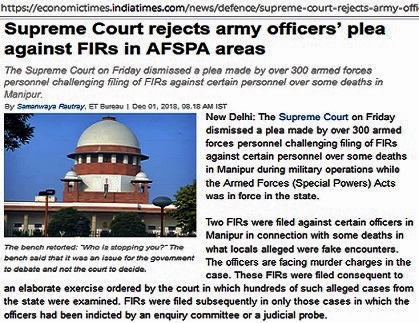 Two of the army men are facing murder charges. There is no denying that there are trigger-happy individuals in the army too who may commit excesses. But the answer to that is complaints and prosecution by the Army Courts and not by Civil courts. When civil courts can frequently intervene then there is no question of “free hand” as Modi keeps asserting. Our army men do not enjoy immunity as such. Even otherwise, they are constantly being questioned by HR agencies and the Congress had gone to the length of calling the Army Chief “Sadak ka Gunda”. Modi HIDES behind this charade of “free hand” to army and thereby absolves himself of any responsibility for the regular terrorist-attacks in Kashmir and conveniently passes it on to the army. This has to stop and PM Modi must clearly take responsibility and outline the strategies and tactics to end the terror-menace. 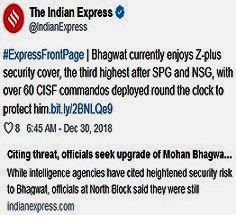 What we have become immune to is the huge cost the negligence of every govt to this menace is heaped on the country. This had struck me quite some time ago but security being an important feature of normal life now I believed there isn’t much to look into this. It came as a surprise to me when I read one day that Mohan Bhagwat, the RSS chief, has 60 CISF security personnel guarding him round the clock. That could possibly be 20 men in each 8-hour shift. And Bhagwat is not any kind of top level govt functionary or head. Of course, Bhagwat does face threats and that is what should force us to ask the question- how did we come to this state where many non-govt, non-uniformed individuals also face a serious threat?

India has no published statistics on the cost of terror. There is no document available that has information on the cost we incur owing to security expense for protection against terrorists. Govt apart, the number of private security service providers has grown from a few in the 1970s to thousands currently. India is the highest employer of private security personnel at 7 Mn and by 2020 this figure is expected to double according MoneyControl. This, indeed, is a huge cost we pay for terrorism:

Of course, this is good employment for many, including ex-Army men and most of those security services are, indeed, being operated by ex-Army officers. Doesn’t take Einstein to figure out that cost of security of our President, PM, Ministers and many MLAs and MPs would be astronomical. I do not have the data and I couldn’t find it anywhere as an overall picture. The high cost of internal security is reflected in our MHA budget. From 61.4K crores in 2014-15 to 83.8K crores in 2017-18 according to this Defence Institute: 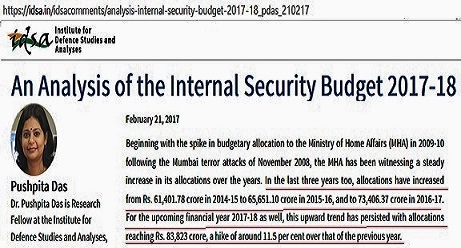 This is not merely the escalating cost of terror but proof of the political pussyfooting and pusillanimity. The human cost of the lives lost is incalculable. But shameless politicians sucking up to stone-pelters, political appeasement of Muslims and other vote-bank considerations has rendered our fight against terrorists the most comic nonsense that one will ever see on earth. One hopes this will change and I hope PM Modi has learned his lessons. There cannot be any sympathy for stone pelters and there cannot be any mercy for those supporting terrorists. Otherwise, the unknown cost being heaped upon the country will go up dramatically apart from the immeasurable cost of human lives and destruction of property.

It is mind-boggling that apart from security to people, govt and govt officials and installations, we have to also bear a heavy cost of protecting the terrorists. The 26/11 terrorist, Ajmal Kasab, is reported to have cost us 31 crores in total. And the number of commandos to protect this terrorist appears to be more than those assigned to a top minister or even the PM or President: 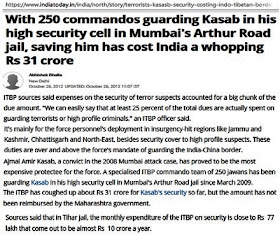 The US war against terrorism includes cost of full-fledged wars in Afghanistan and Iraq apart from their domestic security costs. George Bush had set up a new department of the Homeland Security and passed the Patriot Act as anti-terror measures and suspension of certain freedoms during investigations. Here is a site that measures the cost of security against terrorism in the US. Please note that this is not static information. This site refreshes itself every nano-second and changes numbers which mostly sends the cost upward: 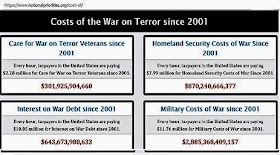 Yet another site has published the statistics on the growth of anti-terrorism spend by the US from 2001 to 2018. In this excerpt I have removed intervening years from 2009 to 2015 to keep the image as small and relevant as possible: 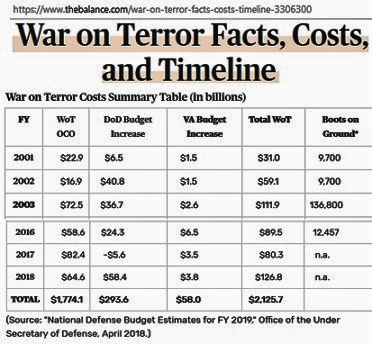 From $31Bn in 2001 to $2125Bn in 2018. I am sure India would have also seen dramatic increase in our terror-costs from 2001 onward, after the attack on Parliament and various other terror attacks but no data is available anywhere. The GOI must start publishing such information so that citizens know how much of their money is going to protect who. Of course, RTI applications can reveal such data in bits and pieces but not the whole picture. 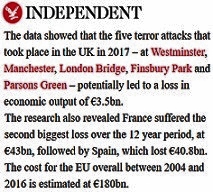 There are other costs to terrorism too. Investments stop in regions where terrorism is a serious threat. To the exemplary credit of PM Modi and ModiSarkar, terrorist attacks in India (other than Kashmir) have dramatically reduced. There is a dramatic decrease in Naxal violence too and that must be recognised as a great achievement. Otherwise, the naxal-infested areas were deprived of investments and development. That is changing. In Europe, Britain and France are paying a heavy cost by not confronting Islamic terrorism. UK lost 3.5Bn Euros worth of business after attacks in 2017 alone. France suffered the biggest loss of 43Bn Euros over a decade followed by Spain with a loss of 40Bn. The overall loss through terrorism for EU is estimated at 180Bn Euros between 2004 and 2016. Fortunately, India has not been affected that severely as it remains the most growing economy and most parts are now safer under this govt. 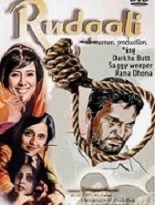 In 2017, I wrote an article “Kashmir Profits Traitors”. We have all kinds of traitors and terrorist-sympathisers who profit from terrorism. Every exploit of Barkha Dutt valley was suspected to be mischievous reporting and only Darth Vader knows who profits from it. There are others like Shekhar Gupta and moronic Rudaalis, like Prashant Bhushan and Bollymorons, whose hearts bleed for terrorists. As a consequence, agencies like Stratfor fund Shekhar Gupta, NGOs get foreign funding from abroad. Some even collect money for terrorists and make it a great theatre for the world to tarnish India. Needless to say, almost all Sickular parties use terrorism to profit electorally. This Kashmir nonsense is purely the gift of the Nehru-Gandhi clan to India. We have been paying a high cost on terrorism right from 1947. Mahatma tactics won’t work against terrorism and PM Modi should learn that sooner than later.

From the Himalayas to our sea-shores to our land-borders, terrorism inflicts a heavy economic cost on India. No country faces such threats from all sides and from within. Shockingly and surprisingly, I am not aware of any economist or financial analyst researching deep into this aspect. Govt doesn’t put out any figures either. Human loss, property loss, opportunities lost – all must probably add up to a huge amount. I don’t have any figure on this economic cost but would put a wild guesstimate at around 2 lakh crores per annum. This is what the enemy wants. The killing of Jawans and civilians, destruction of property and infrastructure is a visible aspect of terrorism. The enemy quietly and silently bleeds our economy too.

Now that the Pulwama attack has consumed 44 of our innocent Jawans there has to be a dramatic change in tactics. “Free hand” to army must indeed MEAN “Free hand”. Stone pelters are the recruiting campus for terrorists and they too should be designated terrorists. No mercy, no sympathy and no opposition to be brooked from any quarter. Pass any law and ordinance that may be required to combat the terrorists. HR agencies or NGOs creating nuisance should be outlawed and prosecuted. Our Jawans and human bodies bleed through terrorism and that is a VISIBLE shocker to all of us. But there is a huge economic price and cost we are paying for failure against terrorism every single day. This hidden cost is in terms of economy, freedoms and immeasurable human cost. This has to change and it had better change immediately. At this juncture in our journey, I don’t see anyone better capable of handling the challenge than PM Modi. But he needs to act assertively.