Let me narrate a small story. It’s probably one of millions of stories one will find across India. Man comes to the city from a village. Finding less-paying work sets off on his own. Starts a small business or eatery selling Pakodas or Pav Bhaaji or Sandwiches or a small Murugan Idli shop. With sincere efforts, persistence and consistent quality of food and service, such tiny tots have grown into big businesses. Everyone has probably heard of the “Lijjat Papad” story. The story I narrate starts from the food-street at Law Garden in Ahmedabad, which is a famous landmark in the city. Honest Pav Bhaaji started as a small “Laari” (or kiosk) on this street in the early 1970s. A single man started this street-shop with a couple of kids as waiters. His Pav Bhaaji came to become the most popular one. This is a recent picture but in the 1970s it was just a single “Laari” with few chairs: 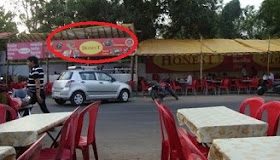 From the street, in a decade, the “Self-employed” Honest guy started opening restaurants around late 1980s. Today, there are about 100 Honest restaurants in India and abroad. Every big business that employs 1000s has always had a seed that was small but nurtured with hard-work, persistence and great economic common sense. These are qualities that our Fiberal Bitchers do not possess. PM Modi himself is an example of a Pav Bhaji or Murugan Idli guy in terms of his public and political career. Historically, India is a land of entrepreneurs whose enterprise was suppressed by the Comminess of JL Nehru and his idiotic policies. From Nehru onward, the Commie Congress made bread and ran hotels as if ordinary Indians are incapable of such enterprise. All that Indians needed was some help, some funds and something like the recent Mudra funding by GOI.

Job creation is an important function of the economy. My attention came to this topic after a cursory scan of TV channels on Sunday, February 10. I saw a woman blabbering nonsense by refusing to see self-employment as employment. Let’s hear what this fossil Arati Jerath had to say in response to BJP spokie Gaurav Bhatia reeling out some figures (video 2.17 mins):

First, a statement of facts: 1) Bhatia claims 1 crore youth were trained under Skill India program. This need not mean all of them got jobs but become more qualified for jobs. 2) Bhatia claims 1.30 crore enrolled in PF. This could be new jobs or also existing establishments which crossed the minimum-employee level to mandatorily register with PF. Either way, it means progress. 3) Mudra loans to 15.6 crore persons. A majority may be new employment but not necessarily all, as many people have taken Mudra loans to “expand” their existing business and not just start a new one.

All the above figures are good but actual employment numbers will need closer inspection and job-creation will always remain a challenging area for any govt. Whether ModiSarkar met their targets or not – they cannot be charged with not making their best attempt in employment generation. But what this bitchy woman, Arati Jerath (AJ) states is simply outrageous. First, she says a Pakoda guy is “entrepreneurship” and second, she says those trained in skills seek “White collar jobs”. How these morons grandly reel off such statements is the consequence of their eternal bitching about Modi. While this post talks about Arati Jerath, I see her a “composite” character of many evil scamsters on this topic. Scamsters like P. Chidambaram who said “selling Pakoda is the same as begging”. And many other Commie scoundrels like TheWire or TheScroll or Stratfor Shekhar.

Arati Jerath is totally wrong and brainless when it comes to such matters. And she is not alone, there are dozens of women like her, in media and NGOs, who keep bitching about Modi on everything. Doesn’t matter what the issue is they will bitch about Modi. There are far more good things that happened under ModiSarkar than in the 55 years of Congis. Many of them quite innovative and, obviously, there will be some duds too. People like AJ are eternal bitchers. They will bitch if it rains, they will bitch if it is sunshine and they will bitch about Modi even with moronic ignorance like that “Default 24” by Nidhi Razdan. AJ dismisses Mudra-employment generation as “entrepreneurs” and that those that got training in skills seek “white collar jobs”. Let us understand who a self-employed person is and who is an entrepreneur:

In short, a self-employed person is one who is involved in every process of the business from production of goods or service to the delivery to the customer, including payment collection. Therefore, a Pakoda guy is a self-employed person. A restaurant owner becomes entrepreneur because he is not involved in all the operations. Cooking, serving, cleaning etc are done contracted workers. The owner is the supervisor and manages the entire business activity. This simple difference is beyond the idiots who keep bitching about Modi. Therefore, AJ should realise that Mudra beneficiaries are not in the “entrepreneur” category as technically understood. They are self-employed persons either starting a new business of their own or expanding an existing one.

The maximum Mudra loan is about 10 lakhs. And because all the bitchers like AJ think a Pakoda guy is a “businessman”, the new ones cannot be counted under “employment generation”. This is as stupid as the bitchers can get. In the stories around us, the small Pakoda and Pav Bhaji guys often grow to huge business when they turn into “entrepreneurs” technically. But when you are soaked deep in hatred for Modi you also lose your senses in understanding simple things. As the hero in the movie “Taken” says – “That is what happens when you sit behind a desk. You forget things, like the weight in the hand of a gun that's loaded and one that's not”.

These worn out Modi-haters sit behind desks, gossip, devise ways to troll Modi and given they are journos, they don’t have the brains to comprehend practical things. Am I just assessing AJ on this single episode? Absolutely not! I have seen her bitching very frequently for nothing. She always sounds like the metallic-whining sound of an Airbus jet at take-off. Back in February 2017, here is what AJ wrote about the election prospects in UP, particularly Varanasi: 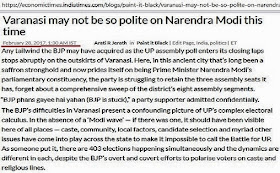 That’s the crap she writes. On what basis? AJ even quotes an anonymous BJP supporting stating “BJP phans gayee hai yahan”. Imaginary, cooked-up sources like the 786 drivers that Barkha Dutt runs into every month. What was the outcome? BJP won all three assembly seats in Varanasi and the state with over 300 seats. How can anyone can go so wrong? If I were writing such reports I would quit and find another profession. But these bitchers just crap because they know in the din of the election outcomes no will bother remembering such idiocy. Well, problem is, no one will remember unless you keep screwing up over and over again and someone starts to dig up the history of your writing and worthless, uneducated crap. Let’s take the second issue of skills development and such trainees seeking “white collar jobs”. The skills under the govt programme are mostly “vocational skills” and not really to train for white collar jobs. Here’s an achievement list at the govt website on the skills programme:

People like AJ have to be mentally bankrupt to think these skill programs are meant to seek white collar jobs. Absolutely not! These trainees are not seeking white collar jobs which requires some level of educational qualification like a graduate or post-graduate degree or some experience. In another site of mine (EducatingFoward.Com) I recently wrote an article “New Collar avenues”. In the new tech-world and emerging domains of AI and other services in many sectors, these skilled persons seek jobs in either a blue-collar area or what is now being called the “new collar” area but definitely not a white-collar job, though that may be their final goal or aspiration. Here are the domains of “new collar” jobs that have been universally identified: 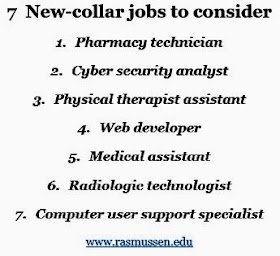 In other words, the “new collar” worker could be in a domain that is mix of both blue and white collar. Modern healthcare machines can do a lot of things on their own but need a trained operator. The skills programme can contribute trainees to such domains to which they can easily adapt as against a white-collar job like HRD Assistant or PRO Assistant. Well, it also helps and makes it easier to constantly bitch about Modi and his successes if you happen to be a Congi footsie blessed with their Vadra associate DLF. Arati may not be the only one. There are many media crooks who benefitted from the largesse of DLF and having filled their corrupt tummies with such gits, their mouth naturally pours out nonsense:

The bitchers, like AJ, do not possess a deep understanding of all of this but grandly declare Mudra beneficiaries don’t fall under employment generated or that skills trainees seek white collar jobs. And TOI has this interesting profile on AJ on their website:

Yes indeed, all these journos are “know-it-all” and specialised in nothing and they are deceptively categorised as “has no political bias”. She doesn’t end up sounding like a “Jholawala”, she IS practically a Jholawala surviving on crumbs that feed her “hate-Modi-for-anything-and-everything” approach to every topic under the sun. The long and short of it- Though a lot many have mocked the Pakoda guy, he does indeed fall under “employment generation” if he has started it new with or without help from the govt. In the US a good number of individuals and Mom & Pop team are “self-employed” and not everyone seeks a job in a giant corporation or a lawyer’s firm or to be a TV panellist for Rs.5000 to blabber nonsense. Every work and job has a dignity to it and the self-employed barber is more needed in society than journos are.