Seems Rajdeep Sardesai was called upon to comment upon what he refers to as the “Arnab-Barkha war”. RS must have realised this would mean “Monkey Balancing” between two former colleagues. So he wisely chooses not to speak. He writes “Why I will not speak on the Arnab-Barkha 'war'”. Though it fails my intelligence why he should even write the article if he did not want to speak about it. This is quite similar to Barkha saying “I don’t give a toss” about what Arnab says but keeps on ranting. Here’s part of what RS wrote in his inconsolable grief on having to MB between his two friends:

“If you talk of the pain of two wasted generations of Kashmiri youth living under a draconian law like AFSPA, then you are an anti national, pseudo liberal. If you scream about the agony of Kashmiri Pandits becoming refugees in their own country, then you are a 'nationalist' and a patriot. If you speak of both tragedies, then you are, as some of us are lampooned, a 'monkey balancer'. If you report on the travails of our soldiers facing stones in Kashmir and land mines in Naxal areas, you are a desh bhakt and nationalist; if you expose the human right violations in the valley or tribal India, you are anti national. If you report on both, you are, well, considered a 'monkey balancer'…. Well, here is my take: journalism is actually often about being a 'monkey balancer', of diligently seeking the truth….”


Deah Oh Dear! After reading the above I had to scratch my head. Despite coining the title “Monkey Balancer” for him I now realise I did not explain the concept properly to RS at all. I guess I'm a bad teacher. Because RS claims monkey balancing is the right approach to journalism and seeking the truth in his article. Alarming!


I should have explained to RS that “Balanced Reporting” and “Monkey Balancing” are two different things. When you FAIRLY report two sides of a coin on the same issue or event or incident one could call it balanced reporting. But when you try to connect and equate two unrelated issues, events or incidents to cover up for one, I call it “Monkey Balancing”. For instance, he refers to KPs and AFSPA. If you were to fairly report the situation on both in a given context that would be considered balanced. Also, if you want to report tribal conditions and travails of our jawans in Naxal areas then both have to be in a given context. One cannot report either as a stand alone issue and claim balanced reporting. So let me make a second attempt at educating Rajdeep on what constitutes Monkey Balancing and I hope I succeed this time.


First, let’s start with some others. None better than the legal-saint of wrong causes, the one called Indira Jaising, who is also accused of FCRA violations in her NGO: 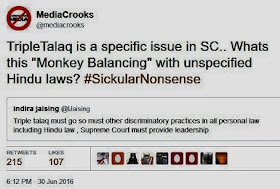 Get it? There is a petition in SC against triple talaaq but the woman talks nonsense and equates it with discriminatory practices in other religions including Hindu law. Is there a petition against any Hindu law? NO! On the contrary, the SC is on record stating govts have only reformed Hindu laws. And the beauty? Jaising is actually defending triple talaaq in the SC. It’s not just monkey balancing but brazen hypocrisy and lying in public. Next, let’s take up “Wheeler-Dealer” royale of Luyens: 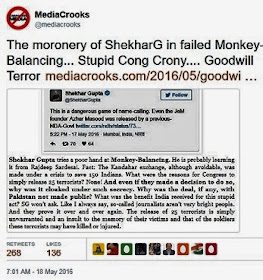 Congress had released some 25 Pak terrorists secretly. When the party was slammed Shekhar Gupta equates it with the release of a terrorist during the Kandahar hostage crisis. Is there any equivalence? Azhar Masood was released during the Kandahar situation to save Indian lives under great pressure from the families and, yes, the media too. So this bogus equation by SG is to defend his darling Congress in their inexplicable decision which has no reason whatsoever. Okay, so who should I go to next? Ummm… why not Rajdeep’s very own?

The great Indian economist states economy is tanking and people are yelling Malda and Jallikattu. Really? So because the economy is supposedly bad we should not talk about other things? Especially Malda? Let’s see, we shouldn’t talk about Malda because it involves Muslim violence. And she lies too. Malda never made any noise in the media; they mostly blacked it out. What if it were to be about Hindus? Both Rajdeep and Sagarika would be jumping up and down like kids and screaming their lungs out – economy tanking or not. It is like, there are severe floods in Assam but PM is on a tour to Africa. This is stupid monkey balancing and not even an intelligent one. But hold on! Sagarika is not the type to disappoint us. Let’s pick on her very good friend whom she slyly defends: 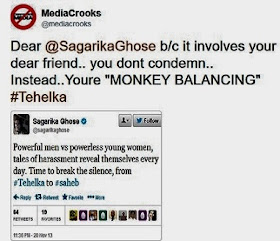 Now, these were concocted allegations against some Saheb (A reference to Narendra Modi, I guess) and there was trash galore in the media somehow trying to taint him. So what does C5M do? She washes the sins of her good friend Tarun Tejpal (accused of rape) with a false equation. Even otherwise, Saheb was not even alleged to have been in any rape incident or anything. So you see, how cleverly this monkey thing works Rajdeep? Now, let’s go to the Master himself – Rajdeep, the Chief Monkey Balancer of Indian media: 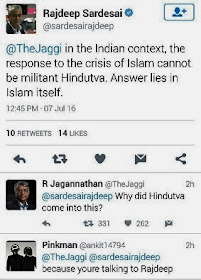 I really laughed when I first saw this. TheJaggi was talking about how Islam itself has to cure Islamic militancy but Rajdeep jumps in with militant Hindutva. He stuns even TheJaggi. First, there is no such thing as militant Hindutva. It’s as much a nonsensical creation of Hindu-hater Rajdeep as was “Saffron terror” by his Congi bosses. Whereas, Islamic terror is universal. This is why Rajdeep is a MONKEY BALANCER of the worst kind. This has nothing to do with BALANCED REPORTING. Best part of the above image is – TheJaggi asks why did Hindutva come into this, and the guy below answers “Because you’re talking to Rajdeep”. That’s how much Rajdeep is identified with hating Hindus. I like Rajdeep, so let’s roll some more… 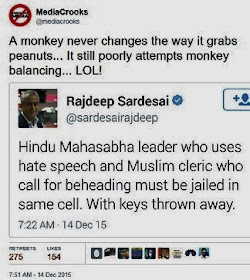 Damn! Somehow because some cleric called for a beheading our monkey balancer has to bring in some Hindu Mahasabha leader. Well, he would have a point if the acts were equal. The Muslim calls for BEHEADING and Rajdeep wants it to be equated to some hate speech by a Hindu leader. Where is the equivalence? Are the crimes similar? No! Even if they were, why should the two be equated without the context of the crime? I was about to close class but I heard Rajdeep begging for one more chapter. Here you go: 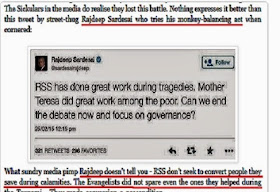 That one is really the best in this list. Chief Monkey Balancer equates RSS relief work with Mother Teresa’s work with the poor. MT’s work with the poor is in reality a lot of myth. She just helped the poor and sick die as Christians. Secondly, as my narration in the image says – Did RSS seek to convert people they save? The Mother Teresa types and other Christian relief works do it primarily to seek more goats to convert. There is no equivalence. This is Monkey Balancing of the WORST kind by Rajdeep that is intended to belittle the Hindu organisation that has saved many lives over the years without any selfish motives. The opposite is not true for Jesus-Salesmen.


In case Rajdeep still doesn’t get it, I derived Monkey Balancing from the old Panchatantra story. In the story two cats find a Roti and fight over it. Monkey comes along and promises equal share for both but keeps dividing the Roti unequally and keeps eating up the excess portion from each. In the end there is no Roti left. The cats are fooled.  The Monkey is a clever cheat. That’s why Rajdeep “don’t pride yourself in monkey balancing”, it is the attribute of a cheat. That’s why you got that title.