The last major political leader from the Congress to die of natural causes was Vilasrao Deshmukh in August 2012. While Deshmukh seemed quite active in the months prior to his death it was a surprise to find he was ailing so seriously and a last minute liver transplant was also aborted because the donor died before the operation. Other than the scams that he was accused of Deshmukh was quite a popular leader in Maharashtra. Final reports on his death indicate he was suffering from liver failure which led to kidney failure which led to lungs failure and all of these led to heart failure. That sounds like total chaos, a lot like the Congress and UPA which are suffering multiple ailments.

For 16 consecutive days now our media has been soaked in the IPL scam with just a pause for minor news items like naxal attacks or ministers resigning in Andhra. All of them just want one thing; N. Srinivasan to resign as BCCI president. TimesNow has gone a step beyond NDTV, CNN-IBN and HeadlinesToday, the channel is now calling it “Crusade for Cricket”. When George Bush used the term “crusade” after the 9/11 attacks for the war against terrorism he quickly withdrew that term and settled for ‘Operation enduring freedom’. I hope the liberals and Islamists don’t attack TimesNow for carrying out a “Crusade” for Cricket. All of them want Srinivasan to resign on moral grounds. It’s a fair demand but the political leadership from which most morals flow in public life has long dumped morals. The last time morals were seen in Indian Cricket was when GR Vishwanath recalled Bob Taylor for a wrong dismissal in the 1979-80 Golden Jubilee test. Well, Taylor went on to score a century and India lost the match. Since then it has been “law will take its course”. But the IPL scam reporting was helping bury many a Congress-UPA crime but when organs fail, they are bound to give a rude shock. The Chattisgarh naxal attack of May 25 was one massive heart attack to the Congress, BJP and the media.

Now that more details of the Maoists attack trickle in it seems quite obvious that the attack was a conspiracy hatched by a politician or a group of politicians. The Maoists seemed to know who will be there in the convoy and sought out specific politicians as targets and killed them. Their main target was Mahendra Karma, who supposedly founded the Salwa Judum, but they allowed Kawai Lakma, a close associate of Ajit Jogi, to escape. Sonia Gandhi, Rahul Gandhi, Manmohan Singh all rushed to Raipur. Amazing! 14 Congress lives and 7 security personnel were killed. I’m quite sure these three Congress heads didn’t rush to Raipur for the security personnel killed.

At the Governor’s meet over the incident, where neither SoniaG nor RahulG had any right to be present, RahulG kept asking “who is responsible”? Funny, isn’t it? A man who is responsible for nothing and to no one in this country asks that question. A man whose own constituency Amethi has failed on most development index and who is an “Eid ka chand” in parliament talks about responsibility. This was the guy who was partying after 26/11. This is the same Pappu who said “Congress supported BJP during Kargil”. Responsibility? Chest-beating at best! Never mind! And Minister Jairam Ramesh screams “we will win the war against naxalism”. How he proposes to do so, nobody knows.

Contrast all the drama of the trinity from Congress to the deadly attack on CRPF and Police personnel in April 2010. 75 were ambushed and brutally killed. SoniaG, RahulG or MMS didn’t rush to Dantewada. It seems only when their party men are attacked that wakes up politicians. This must make the naxals feel that targeting politicians pays better dividends. The moronery and hypocrisy of MMS and his party wasn’t more visible than in the fact that in October 2009 he grandly stated naxalism “is the greatest internal threat to India”. Well, what has he done about it? We don’t know. Hundreds have died since then. That statement by MMS wasn’t made at some security meet it was made to reporters at a function of the National Centre for Performing Arts. Very artful indeed! The horrible fact is that the GOI has no clue, no policy on how to deal with the naxals. And they reward convicted Maoist sympathisers like Binayak Sen with positions in the Planning Commission.

The MSM was forced to reluctantly report the Chattisgarh killings only to return to the IPL scam all over again. One fails to understand why this obsession with a betting and fixing scam which is relatively petty when compared to other issues of importance. Let’s not complain too much. In between there were some other issues too. RahulG, continuing his moronic utterances, made a grand statement to his partymen “My mother is lenient but I am strict” he said. Very nice! And following this stupidity NDTV held a debate on who is the tougher boss, SoniaG or RahulG. I’m not joking, take a look yourself. For NDTV that’s a serious issue to be debated as it is a serious concern for voters. 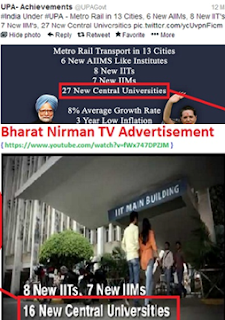 It also helps that the IPL scam coverage helped to completely ignore the indictment of Delhi CM Sheila Dikshit by the Lokayukta. She has been indicted for misusing 22 crores of public money for promotions and has been asked to repay 11 crores. And while the IPL coverage was on and was brutally interrupted by the Chattisgarh disaster the Congress continued to run Bharat Nirman ads. Irony! In the commercial breaks while reporting the deadly Maoist attacks TV channels were running a “minority appeasement” ad under Bharat Nirman. The ad claims 1.65 lakh crores worth of loans/scholarships to 65 lakh minority students. I wonder how they arrived at these figures. In another ad the Congress claims having started 27 new central universities in print and 11 of the same in the TV ad. Why these differences? Media usually doesn’t debate content of commercial ads as a policy. But the BN ads are not mere commercials. They are govt and political ads whose content needs verification and analysis. The amounts involved are far higher than the IPL betting scam. The BN ads on TV and in print have conflicting numbers in many ads and our media won’t verify or question it. Why should they? After all, they are the beneficiaries. There must be a warning from upstairs: ‘No negative news about Congress, else no BN ads for you, so behave’!

Amidst all this the Telengana issue has started to burn again. A senior Congress CWC member, Keshav Rao, has quit the party in support of Telengana and joined the TRS party. I guess the politicians will push Telengana to a stage where it will create more Maoists and then will sit and discuss strategy. RahulG will ask “who is responsible?” and our media will be happy to show sensational scenes of riots and self-immolation. And while the Chattisgarh attacks happened our Home Minister happily extended his stay in the US. His reason for extension was an appointment with an eye doctor on May 28. Sushil Kumar Shinde’s casual approach is quite reflective of the failure of the Congress party and its govt. So while there is tall talk by the Congress on its achievements it seems the Indian colleges, hospitals and doctors are simply not good enough for their party members. It’s always US or some foreign country. (Read An Idiot’s guide to Bharat Nirman) Remember, during the December 2012 agitation over the Delhi gangrape Shinde famously said... let me just quote him:

"It is very easy to ask the Home Minister to go to India Gate and talk. Tomorrow if any other party's demonstration goes on why should not the Home Minister go there. Tomorrow Congress and BJP will demonstrate, tomorrow Maoists will come here to demonstrate with weapons,"… Shinde said the people should understand the government's role and the government should not go anywhere. This will happen tomorrow, for any government. Why should the government go anywhere"?  There, that should tell you how Shinde views Maoists but it proves that MMS, SoniaG and RahulG wouldn’t have rushed to Raipur if the Congressmen weren’t killed. And today, May 31, when Shinde did manage to visit Chattisgarh he again made the most moronic statement: “This Maoist attack is worse than any terrorism”. The Congress didn’t feel so when the 75 jawans were killed in Dantewada.

The latest to play the victim is Aruna Roy. She has quit the private durbar of SoniaG called NAC because she is unhappy the govt is not implementing policies for the poor (that she wants?). In short Aruna Roy is telling us: Govt bad, SoniaG good! Surprising, since the Bharat Nirman ads claim they have done a lot for the poor. Congress has even given a darshan of Metro rail in Delhi to village bumpkins. What more do you want? In a chat with NDTV (who else) Roy mentioned she would now like to work from the “outside”. Really? When exactly was she working from “within”? The NAC is not a part of the govt so she was anyway an outsider in SoniaG’s coterie trying to legislate for the parliament. So like it or not even a Darbari from SoniaG’s coterie is not happy with govt’s work for the poor.

In conclusion, one has to make the sad comparison between the final days of Vilasrao Deshmukh and his party itself. It is now a party and a govt that is suffering multiple ailments of a serious nature. Many critical parts have failed beyond repair and it makes a bad picture.

SoniaG, MMS, RahulG, Ministers, Policy paralysis, foreign policy failure, economic sluggishness, corruption of media, never-ending number of scams, low morale of army and police, and it goes on and on and on. When Deshmukh died he must have at the very least left a fair bit of assets for his family. Each failure of the Congress results in worsening shock. When the UPA2 dies, the nation will be five years older and deeper in debt and our media friends will still be chasing Srinivasan. Cause of death: Multiple organ failure.