My gut feeling says nobody in India gives a damn about elections in Pakistan except for a general knowledge of the final outcome. Some party that Nawaz Sharif heads won the elections and he will be sworn in PM. There are exceptions though. The only ones who care about what happens in Pakistan are in the GOI, the track2 establishment, some power-mongers in our news media, the Scotch circuit and Bollywood. And then there is the “Evoluter” Barkha Dutt. She is a specialist in “evolving” leaders and personalities. I’m sure readers of this blog remember her “Evolution of Rahul Gandhi”. She has tried very hard with the “evolution of Imran Khan” too and failed again.

So it’s not just Barkha Dutt (BD) but Rajdeep Sardesai (RS) also wants us to learn lessons from Pakistan. I would rather you read the book ‘Leadership secrets of Attila the Hun’ but never mind. So both RS and BD turn to the mother-ship of their ‘Unholy Trinity’, Hindustan Times, to write on the lessons to be learnt from Pak elections. RS calls it “Bowling a dot ball” and BD simply calls it “Lessons from Pakistan”. Considering RS is a Cricket lover his title is natural and considering BD is a Pakistan lover her title is natural too. But when you look at the content, both are deceptively identical. That’s their talent – deception. What both are trying to do is to draw lessons from Imran Khan’s failure to win and equate it to another forceful personality in Indian politics. Do you really want me to name that Indian personality? I don’t think so and these two propagandists don’t name him or anyone directly either.

But on an overall assessment Rajdeep does make a lot more sense than Barkha. It’s merely because  when he is off TV RS puts a lot of thought behind what he writes or says and I have said this often. Here’s something critical that RS writes in his piece:

“Imran’s cheerleaders genuinely believed that the youth of the country was fully behind him. The social media campaigns were seen to be a critical element of this age group’s desire for change. Imran was able to harness social media effectively and draw new faces into his political party, but when it came to the crunch it became clear the ‘youth’ factor was a little exaggerated as was the appeal of a twitter and facebook generation. The social network universe will always be lesser than the political universe. In the heat and dust of the countryside, it doesn’t really matter how many followers you have on twitter. These followers can create an echo effect across media platforms; what they cannot do is influence voting patterns across a diverse population”.

Fair enough! But who in hell ever told RS or any MSM person that SM claimed it would influence elections? Nobody did, except the fakes in the MSM. Secondly, the lesson that RS draws is truly applicable to Arvind Kejriwal & his party rather than the “other person” that RS is targeting. The other person that RS targets with his comments has worked his way up from scratch and has proven electoral success against the severest propaganda, vilification and witch-hunt by RS & Co. In contrast, Imran Khan has received tremendous bootlicking from the media, including Indian media. That’s a major difference. So it has nothing to do with SM. The awful truth is that anything that TV and MSM hype falls flat on the ground. But RS has been largely fair in his assessment. So let’s get to BD for whom Pakistan is second home as it is for her channel, NDTV. Take a look at these pics. They are all from all the interviews she has held with Imran Khan in the last two years, at least 4 of them. 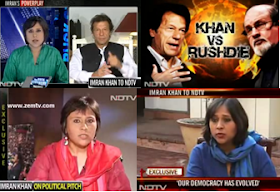 These are four of them and there could be other interviews that I may have missed. Then just before the elections when Imran was injured BD found a substitute in his sister Aleema and interviewed her in the hospital that treated Imran. The first pic (with BD in green) is where Barkha mentioned the “evolution of Imran Khan”. I’m not joking you can hear it on Youtube. This is when she was talking about his autobiography and so enamoured was she that she was even discussing his hairstyle. Is that all? No! After her September 2012 interview with Imran, NDTV headlined that he would like to borrow from Bihar CM Nitish Kumar. Ah yes, Nitish the “secular messiah”. 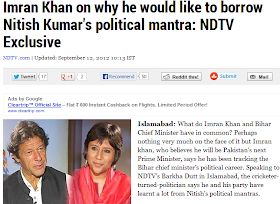 I get a feeling Nitish Kumar might get a scare if he finds out Imran borrowed from him and failed. And she claims Pak media pays him too much attention. And after all the swooning over him BD writes:

“As the eventual outcome shows one man (Imran)  had overstated his performance without a trace of self-doubt; the other (Sharif) ended up being so cautious that the scale of his victory came as a surprise even to him…. Imran Khan's innings are proof that media googlies aren't enough to bowl out an old-style veteran of politics. The media in Pakistan had virtually anointed Khan as victor before the votes could be cast or counted”. Really? But does the media anywhere learn any lessons? Has Barkha learnt any lessons from her evolution of the Gandhi prior to UP elections? It doesn’t seem so. Why else would she and her channel be so heavily addicted to Imran Khan? And all these googlies were only from Pak media and not from her? Laugh till you die!

Now let’s see what she concludes and then what Rajdeep concludes. It makes quite interesting reading:

BD: For us in the media there is also a message in what happens when you script a complex political battle as a clash of personalities. It's a global news instinct and one that makes for better copy. But at the same time it often defies the arithmetic of what makes a party win in a parliamentary democracy. Elections in our part of the world are not a contest between personality cults. The face-off between the Rahul Gandhi vs Narendra Modi camps, online and offline, may have precious little to do with the reasons for victory and defeat in 2014.

RS: Finally, Imran’s mixed results in these elections reveal the limitation of charisma in sub-continental politics. Yes, there have been film stars who have achieved some success in electoral politics. MGR and NTR truly stand out in this context, cinematic legends who were able to transfer their celluloid power onto the political stage in spectacular fashion. But MGR in particular had a strong AIADMK network to assist him; his folk hero image was a bonus. Other ‘star’ politicians have realised that politics is more than just dialogue delivery and good looks.

I cannot help believing that these two people never look in the mirror. Who scripted the Rahul-Modi combat? No one except the media! As far as I know and even genuinely honest observers will admit Rahul is a total non-performer, has shown no accountability and his utterances are so full of stupidity that any comparison to Modi is even comic. But the media does this to protect the queen, Sonia Gandhi as I have said repeatedly. The media is willing to make RahulG the sacrificial goat against Modi while making sure they keep all the weaknesses, drawbacks and incompetence of Sonia Gandhi cloaked from exposure. 2014 is not a battle between Rahul and Modi as our media morons keep repeating deceptively like a parrot. It’s a battle between Modi and SoniaG. I would say even Imran Khan is a better political leader than RahulG any single day. He has proven leadership at least in some endeavour.

Lastly, both RS and BD peddle this atrocious fallacy in their articles in different words. Let me use BD’s words: “Finally, in the absolute decimation of the party that the Bhuttos built is a message that lineage and ancestry only carry you so far in politics and no further. Misgovernance, inefficiency and corruption will be punished by voters, no matter how glamorous or brave one's pedigree is. Assumptions based on privilege; charm and charisma; media endorsements - none of these are accurate clues to the mind of the voter. So beware all those who claim to know what will happen in 2014”.

Both RS and BD demonstrate a fear that the Gandhis, that they have so faithfully served all these years, may meet the same fate as the Bhuttos. But they mislead when they say that lineage and ancestry carry you only so far. Coming from a slave media that is the worst untruth you will hear. Nehru, Gandhi, Gandhi, Gandhi and again another Gandhi is what has ailed India all this while. A mature media should have been instrumental in getting the people out of the clutches of slavery to lineage and ancestry. In contrast, both RS and BD have the deepest contempt for the guy who rose even when he doesn’t have such lineage and ancestry and started life as a “Chaiwalla”. So both these media celebs continue their proven hypocrisy.

It is not Indians who need to learn a lesson from Pakistan but Barkha who seriously needs to do so. She must learn that all her propaganda has failed electorally. She failed to evolve Rahul Gandhi and she failed to evolve Imran Khan. Does she have it in her to learn and change tracks and serve the cause of genuine reporting? Evolution awaits her!