An Idiot's Guide To Bharat Nirman


Someone wisely said "If you can't blind them with brilliance, then bedazzle them with bullshit..." This works fine for our media folks. For the eighth straight day yesterday they continued to fool the people with the distraction of IPL Spotfixing issue. This is not to suggest that they shouldn’t cover it but it certainly doesn’t deserve the 24X7 coverage that it is being given. Perhaps there were orders from upstairs that the GOI didn’t want adverse coverage of its non-performance on Rajiv Gandhi’s death anniversary and particularly so on the 4th anniversary of UPA2. Both these events passed with minimal assessment of the UPA and Congress performance. The most corrupt govt in the history of the democratic world and the most non-performing one too. That is how I would summarise the govt of Sonia Gandhi and Manmohan Singh. The latter is easily the most insipid PM this country has ever had. There was another event that the GOI may not have wanted to spoil; the Chinese Premier’s visit.

So Spotfixing was handy for the media to fool the nation. And there was enough incentive too. The spate of Bharat Nirman ads by the Congress with public money has pushed all other ads into back of the mind position. Some have compared it to the “India Shining” campaign of BJP in 2004 which backfired. But the Nirman ads are being viewed in the age of Social Media (SM) which doesn’t hesitate to call BS when it sees it. A couple of news media houses have debated the Nirman ads but other than that most news channels are just happy to enjoy the luxury dole that has dropped into their lap. Why complain! The other big difference from 2004 is that the Congress cannot help making you believe that everything in this country was brought to you by the Nehrus and Gandhis, the rest of India are just passengers who ride their train. You know, like if you travel on national highways of the Golden Quadrilateral the pics of AB Vajpayee have been removed and replaced by Sonia Gandhi. It’s like ‘Made by Sonia Gandhi’ even when she had absolutely nothing to do with it.

The core Congress message of these Bharat Nirman ads are: 1) You are a bunch of idiots and you can be fooled over and over again. 2) You are not smart enough to notice our hypocrisy. 3) We have nothing brilliant to show for performance so you we are going to bedazzle you with bullshit.

So let’s look at a couple of these Bharat Nirman ads and see what the Congress and the GOI really want to communicate to us. The first one is about the great educational institutions their govt has created so that your kid never has to go abroad (Video 1.01mins) 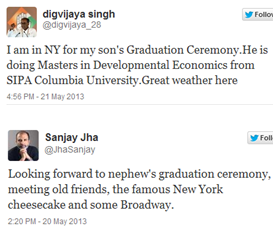 Voila! Move over US and Japan! Our kids have now made robots that serve tea to guests. I can believe that part definitely because Indian kids have proven themselves to be smarter than many others in the world. But for all the screaming about so many great institutions the Congress has created so that your children don’t have to go abroad, where do the ‘motor mouths’ of the Congress have their kids going? You have unauthorised spokies Digvijaya Singh and Sanjay Jha of the Congress thrilled being in New York for the graduation of the sons and nephews. Of course, their party boss doesn’t trust any Indian doctor or hospital at all. Nobody knows her illness but whenever she sneezes she rushes off to New York, Amsterdam or Rome or wherever ‘Veni Vidi Vici’ will take her to be treated. So these institutions are created for desi bumpkins by the Nehru-Gandhi clan, so be grateful and vote for Congress.

As a marketing person, I can tell you, one of the first things in selling a product is to imagine a picture of who your customer is. Preferably even draw a sketch of that customer or group. You will find that exercise quite enjoyable. The Congress is a master at drawing this picture. In other words they are quite clear who their voter is. This is a good thing for any political party. They are even better, they ensure their customer stays the way he has always been; a perfect village bumpkin or a village idiot. Keep them permanently in low education levels and low development of their villages so that they marvel at the wonders of the world the Congress creates. This village bumpkin explains how he saw magic stairs that go up and down. He describes how this that magic thing goes “Trrrrrrr” above ground and “Trrrrrrr” underground and how it has magic doors that open and close. Whoa! What could that possibly be? And the other village bumpkins are stunned and wonder if the Bumpkin No.1 has gone crazy or senile. Watch (0.34mins):

The political tactic of the Congress is stark in the ad. Keep them uneducated, keep them in unemployment. Then the white-skinned ones will come and deliver “magic” to them and overawe them with a basket of doles like NREGA or FSB and make them feel “look at what your mai-baap have done for you”. If after 65 years of independence our villagers have to be still overawed by metro trains then it speaks a lot for how pathetic our govts have been, mostly the Congress govt. Considering the first metro started in Kolkata around 1986-87 you can calculate how far behind in time other cities are. And even the urban transport system is named JNURM after Jawaharlal Nehru. So there you go, if you have BRTS or better buses in your city, it’s a gift from Nehru. Be grateful, bumpkins! While the media does analyse whether these Bharat Nirman ads are “image make-overs” they don’t look at how clinically deceptive they are. Why would they? After all the Gandhi name spells money all over.

Lately, the Congress has been screaming the Opposition is “anti-poor” because the Food Security Bill (FSB) wasn’t passed in the last parliament session. That was washed out over Ashwani Kumar and Pawan Bansal. How long can you sustain the poor with doles and overawe them with metro rails? Well, as long as you “walk the dog” and make sure the crumbs are delivered to the poodles in time. Considering the PM and Sonia Gandhi are so concerned for the poor, how does it explain an expense of over 140 crores over the last 3 years on various anniversaries?


There are many newspapers and channels which survive purely on the govt doles. Not surprising! This is why I once wrote “Saving Shekhar’s Express” on the ads doled out to the paper. That is just the official spend. If you add up other state expenditures and other surrogate ads the total could go well over 300 crores (Do read “The Gandhi Septology”). Now on top of all these comes election and boom-time with Bharat Nirman. Do you really expect the poodles to be honest? Naturally, the media doesn’t challenge it when RahulG and SoniaG go around stating “RajivG brought computer to India” or “Nehru brought gas to India”. These statements are now the butt of jokes on the SM. That’s how Bharat was Nirmaned!

The Chinese Premier was recently here after the Ladakh incursion. Seems peace was made and that just reminded me of something; an old story. When the Chinese and Japanese made peace after the world war the Chinese decided to present the Japs with a gift. They presented them with a 1mm thick and one-metre long pure-Gold thread. The Japs accepted it but were stunned how the Chinese could create such a marvel. So they got together their best engineers to find out how they could do better. The Japanese finally got it and they drilled a hole right through the 1mm gold thread and presented it to Germany. The Germans accepted it but were rattled that the Chinese and Japs could be better than them at such marvellous engineering and their govt couldn’t rest till they had outdone those two. So the German govt employed their best scientists to make an improvement to the thread. Finally, the German engineers created an even thinner golden thread and passed it through the thin hole in the 1mm gold thread given by the Japs and tied a knot at both ends. The German govt was thrilled and told the Japs and Chinese what they had accomplished.

Years later the Germans presented the golden thread to the Indian govt. Our govt didn’t waste any time calling engineers and scientists to add value to it. The big boss just ordered that it be named as “Rajiv Gandhi Golden Wonder” and the village bumpkins came and marvelled at this wonder. That is how Bharat Nirman happens. Anything that is done, anything that is created with people’s money and energy is courtesy some Nehru or Gandhi. Build anything, dole out anything and just put a stamp on it: “Made by Gandhis”. Bharat Nirman!

Update: This post quoted some figures from a Newslaundry report on advertisement figures on May 21 Rajiv Gandhi death anniversary. The site has since reported those figures being inaccurate and therefore the figures quoting them have been removed.
Ravinar at 5/23/2013 06:39:00 PM
Share