It’s OK to string along a source; journalists are SOBs (sons of bitches), so that’s fine. Hold it, not so fast! Don’t draw your guns yet. That wasn’t me; that was Shekhar Gupta, a regular feature on NDTV. Read the last part in this earlier post. Any idea what Gupta was referring to? Umm… he was referring to Radiagate and journalists caught on tapes. Lately, NDTV’s Group Editor Barkha Dutt (BD) has been rattled by a few articles and a few tweets. She has been lampooned for calling the Delhi protesters over the Gangrape incident “Lumpens” and then messing around with unreliable information in the case of Constable Subhash Tomar. A day ago she was again ridiculed for her tweets disclosing the hospital and destination for medical treatment of the victim in Singapore. Not much wrong there except that they questioned why she supported so much privacy for someone else.

This site has regularly and frequently exposed the hypocrisy of BD and her double-speak as also of other media celebs and news outlets. It has also pointed out her highly politicised journalism and tweets far more often than any other site. Do read these if you haven’t already: “Evolving the Gandhi”, “Delhi Protests: Lumpens in media”, “Roman Agent in Gujarat” and “Gangrape,Subhash Tomar & Monkey-fisted media”. The latest ones seem to have upset her. Not just these posts but certain tweets also seem to have upset her. Naturally, BD seems to be itching to get back at MediaCrooks (MC). Only, she has nothing to get back with except more rubbish and more nonsense that has been her traditional style. You see, she’s been having a bad week. Narendra Modi won Gujarat again and her tweets, as also poor journalism at NDTV, are being exposed. After the recent posts I mentioned, some others weren’t so kind to her either. Here’s how it started. 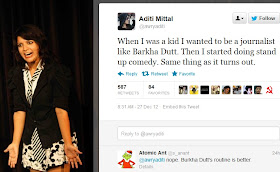 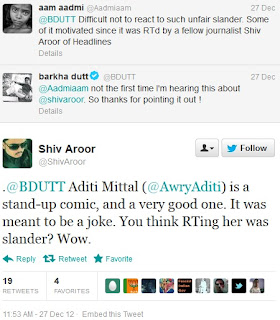 Aditi Mittal started it off on December 27 with the humorous tweet above. Barkha’s twitter friends pointed it out and BD was upset (which she mostly is). Shiv Aroor of Headlines Today seems to have RT’d it and that had BD fuming. Seems some of BD’s fans were upset too, they called it “slander”. That should tell you how intelligent some of BD’s followers are. BD reacted as if Shiv was the one who was cracking the jokes and wasn’t the first time she had heard about him doing so. Shiv pointed out to her that Aditi was a stand-up comic (as her profile says) and is bound to crack jokes at public figures and celebrities. Poor BD couldn’t tolerate it. You see, BD wants that only she should have the privilege of making silly tweets all to herself. Maybe UPA will pass a law for her on that. With the Delhi Gangrape and the idiotic comments of Abhijit Mukherjee (“Dented & Painted women”) in the news BD thought the best way to escape from her series of bad tweets and judgements was to play “victim” by claiming to be abused because she’s a woman. That’s a regular routine, isn’t it? 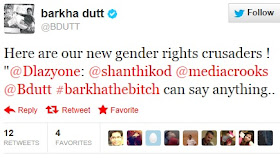 Early morning on December 28 she sends out this tweet quoting the tag “BarkhaTheBitch” and sarcastically asking if these were the “new gender rights crusaders”. I’m not sure she asked the same question to her friend and frequent guest on NDTV, Shekhar Gupta, who called all journalists “bitches” in the context of Radiagate. Never mind! But BD doesn’t show the original tweet as ‘RT’ but quotes it so that it could be misinterpreted by her fans of the ‘dumb category’. And they respond true to form. Before you know they are all tweeting and RTing as if MC had called her a “bitch”. And being called so upsets her tremendously and some try to pin it on MediaCrooks! In the post about Barkha calling protesters against the Delhi Gangrape “Lumpens”, it’s not just ordinary folks but even an independent journalist Andrew Buncombe couldn’t help noticing NDTV’s nonsense. In the case of her tweets on the rape victim being shifted to a hospital abroad even NYT’s IndiaInk couldn’t help recording her silly tweet and a response to it. 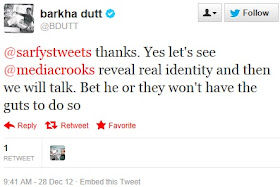 Along with other fans of BD, a guy called @Sarfystweets consoles her and sends out tweets to everyone implying MC called Barkha a “bitch”. Haha! And poor BD is thrilled to bits. She thanks @Sarfystweets and wants to know if MC has guts to reveal his identity and that she will then “talk”. Ahem! Guts? Talk? BD has TV, Twitter and even has Hindustan Times to rant with, so I wonder what she wants to talk about. Anyway, one of her former colleagues from NDTV once made the same mistake of calling MC an “Anonymous, unreachable terrorist”. He had to eat crow. He learned that there is no secrecy except in the minds of those who are rattled and want to play victim, like BD does. And even that victimhood is fake and based on peddling tweets to read differently from what they really are. (If I have not posted the tweet of Sarfystweets here it’s because the idiotic tweet actually contains inadvertent, unintended ridicule of Barkha).

Here’s the actual tweet. I had tweeted the post about Barkha calling protesters “Lumpens” in conjunction with Abhijit Mukherjee calling women “dented and painted”. The tweet gets RT’d and circulated and people respond in their own way. Someone called @Dlazyone tweets and calls BD “BarkhaTheBitch”. He just happened to tweet to someone else and tagged my handle in the tweet. But Dlazyone doesn’t write about Barkha or the media and doesn’t criticise them that I know of. The one who is scathing, sarcastic, ridicules and pokes fun at the moronery of our media celebs is MediaCrooks. So BD thought it was best to let people imagine that the tweet was originated by me and that she had the chance to play the great wounded victim. FAIL! Even when someone as stupid as Sarfystweets responded to her she didn’t bother to correct him. That’s the kind of dumb fan BD likes. Now you know where her so-called communication skills and “independent-minded” journalism come from. Pathetic! 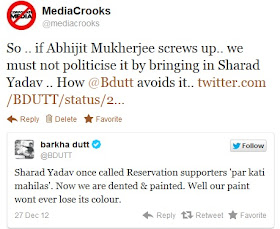 That’s Barkha for you! Wallowing in self-pity! For all her concern for women and woman-hood BD didn’t have much to say about Abhijit Mukherjee’s comment about “Dented & Painted protesting women”. I guess it’s probably very inconvenient to the Congress party and to Barkha. On most other times Barkha would have screamed “let’s not politicise this” and condemned the man. Oh Yeah! Let’s not politicise Mukherjee’s idiotic rant. So what does Barkha do? Instead of unconditionally and clearly condemning Mukherjee, she pulls out a comment of Sharad Yadav to equate it with Mukherjee's. That’s how we avoid politicising attacks on womanhood, right? Like I said in an earlier post, the social media is unforgiving. People on Twitter point out idiocy and “idionaires” faster than BD can say “Bitch”! She’s not the only one; you will find similar tweets from many other media celebs trying to create equivalence. Frankly, I don’t need to use abusive language for our media celebs, there is enough other weaponry and ammunition. Er… Who provides those? Of course, Barkha herself and her MSM community!

Is that all? Nope! Last September a prominent journalist RT’d one of my posts concerning Barkha. Sure enough, Barkha’s crony friends jumped on her like a pack of hyenas. Her crony friends called me names. I chose not to respond then. But guess what! One of Barkha’s good friends (a senior citizen) and someone who fondly admires her rejected the nonsense churned out by her and her friends in a tweet of his. Truth is hard to reject, even by people who aren’t on your side. We will save that story for another time when Barkha decides to play victim again.