Bark In The USA


This is the 50th anniversary of the James Bond series. Most of us love those movies, they’re fun. In ‘Goldfinger’, often rated the best Bond movie, M asks Bond: “What do you know about gold..?”. Bond says: “I know it when I see it!” That is actually a legendary line a US Supreme Court Judge Potter Stewart used in a case about pornography. True for Bias! “You know it when you see it”.

I know a few things that a journalism course might teach. I estimate, though, that they don't run some chapters on how to deal with the "Truth". So Barkha Dutt in the USA, on a “sabbatical” as she says, looked at TV channels like Fox News, MSNBC, CNN and wants to educate Indians on “bias”. So she writes “A Rashomon effect” and doubts over the singularity of ‘Truth’. She borrows the concept from Akiro Kurusawa’s movie. Fair enough. That is about perception of observers of the same event, somewhat like the tricky but gripping movie “Usual Suspects”. In contrast, if one were to use a Hercule Poirot story or movie as example it will be easy to understand how he uses a process of elimination, with even 5 or more suspects in some cases, to arrive at the ‘Truth’ about the real criminal. What creates bias on TV, which BD talks about, is really not about different perceptions but that the “usual suspects” are used to peddle “perceptions”. This is when “bias” slowly morphs into “agenda”. This is the serious mistake that BD and many sermonisers make. Let’s go through some of her write.

As a journalist you train yourself to treat both accolades and abuse with the same level of levity; you tell yourself over and over again to not take yourself seriously and you even learn, eventually, to laugh at yourself. You understand that being in the public gaze inevitably comes with being viewed through a coloured prism — whether rose-tinted or jaundiced. And you develop the ability to lightly shrug off the distortions of a persona foisted on you by others.

Read that opening paragraph carefully. Read again please. Did you? Alright, in the very opening you are declared a prejudiced, jaundiced abuser if you’re not one showering accolades on BD. Smart, eh? Since when is “abuse” the antonym of “accolades”? ‘Bouquet and brickbats’ is a common phrase but ‘Accolades and abuse’? And then the “persona” is foisted by others? It has nothing to do with what the individual herself has done? The opposite of accolades could be censure, rebuke, denunciation, reprimand, criticism but it’s highly unlikely that you will find “abuse” as an antonym. Talk about “perceptions”. Hey, how about: “If you’re not with me, you’re an abuser"?

Towards the end of her article she talks about the Socratic ideal of the unexamined life. There, in that one sentence above is my assessment of BD’s examination. Now if she wants to call it abuse she is welcome to it. Let’s take up some channels BD mentions. BD has simply Coleridged herself, that’s all. Did you ask, what the hell is Coleridged? I don’t know, but I said that cuz it sounds very “intelligent” and “intellectual”. No? Look, if you disagree, you’re abusing me!

Let’s take FoxNews. It’s a known Conservative or, as BD would like to call, a Right-wing news channel. It is not driven by a single personality like NDTV, TimesNow or CNN-IBN but Bill O’Reilly of the channel is a popular and controversial media celebrity. Hard-hitting, opinionated and sometimes even humorous and enjoyable, Bill is the typical arch-enemy of the Left-Liberal channels in the US. Bill is often accused of going after people whose thoughts or actions run against his or FoxNews’ “fair and balanced” agenda. In a recent case his rants against abortion specialist Dr. George Tiller was perceived to be part of the cause for the doctor being shot dead in 2009. That is the “perception” although it may not be the reason at all. Politifact does state:“We found at least 42 instances of O'Reilly mentioning Tiller by name, going back to 2005. In 24 instances, we found that O'Reilly referred to Tiller specifically as a "baby killer”. 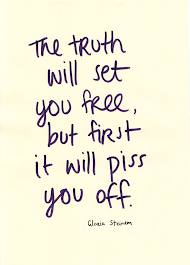 Tiller the baby-killer, rhymes well doesn’t it? Now, compare that with how systematically and consistently channels like NDTV and CNN-IBN have allowed tags like “mass-murderer’, pogrom, genocide. That is not bias, that is “agenda”. Bill O’Reilly makes no secret about his anti-abortion bias. In case of the Indian channels they cloak their bias with intelligent and intellectual debates. They specifically call individuals who have an interest in the agenda and then claim tag lines like “Experience Truth First” as NDTV used to. Singularity of truth? Oh yeah! Narendra Modi is still alive. For all we know, the hate-campaign unleashed by some of our media channels could very well have had him killed. A hate-campaign based on lies, untruths and engineered “perceptions”. The truth might free Barkha but it might piss her off too. Quite often our media celebs tar the truth as “abuse”.

CNN, a lot more centrist, is going down the ratings charts as BD correctly observes. This is more because CNN makes a “fake” attempt at “fair and balanced” debates on issues that do not require debates at all. Let’s take the current Robert Vadra and Salman Khurshid cases. Do these require TV debates? There can be the Rashomon tactic of movie making or the Hercule Poirot method that channels can adopt. Obviously, the Poirot method requires “little grey cells” (as Poirot himself would say) whereas the Rashomon one requires just creative scripting. Both Vadra and Khurshid cases are ones where documents can be scrutinised and investigated and may be one or two legal experts can comment. Instead, getting political spokesmen is the idea of deliberately clouding issues and engineering “perceptions”. Which is the reason CNN’s pretences of bipartisanship fail. Documents, facts, truth do not require a debate all the time unless you are conducting a “show” as all our channels do. Do they?

Let’s turn to MSNBC that BD mentions, a prominent leftist channel. It has celebrities like Rachel Maddow and Keith Olbermann. Oh wait! Olbermann? Yeah, the same guy who was suspended from the channel because he made an undeclared political donation to three political candidates. That broke in the same month as Radiagate – November 2010. Haha! Regardless of what the bias, indiscretions aren’t tolerated by MSNBC. Fareed Zakaria was suspended too. But hey, even after suspicions of “lobbying” and “power-brokering” in ministry formation, BD merrily continues on NDTV without any censure or investigation. Now that’s at least one major difference between the “biased” US channels and the “biased” Indian channels. Let’s read some more by her:

But if there’s one accusation that can still get a rise out of you — triggering annoyance, exasperation or weariness at different times — it is the charge of Bias. So whether it’s from the online armies of ideologues and their weapons of mass fabrication; or more sincere feedback from people who may demand to know why your views on a certain issue have altered — in India, the debate around Media Bias remains volatile, but essentially shallow and infuriating…..

Yet, wearing your political bias on your lapel microphone seems to be the new mantra of successful television in the US. I wouldn’t be surprised if the vitiated political environment in India and the constant pressure for a more provocative and opinionated media, sees a similar trend for us. Whether that’s a good thing or bad- ah well, that would probably depend on your ‘Bias’

So the online armies have their “weapons of mass fabrication” and BD alone has the truth. Ah well, she has the truth, you have the fiction. Like I said there is something worse than bias; it’s called “manipulation”. We know it when we see it. It is precisely for this reason that a few months ago I monitored every minute, every second of a program by BD on NDTV. Instead of merely peddling an opinion, as BD does, I decided to check with statistics and timeshares. In the post titled “NDTV–Evolving The Gandhi” I found that the entire discussion, just before the last UP elections, was manipulated in terms of timeshare in favour of the Congress party. BD herself was more or less the spokesperson for the party. Even her “acting” was bad. That is not a one-off episode. Just before the 2009 general elections BD did an interview with Priyanka Vadra (or Gandhi at election times) which can be best described as “emotional rescue”. Perception or truth? We know it when we see it!

The comparison with the US model is mindless. If they wear their bias on their lapel mics, the Indian counterparts wear it on their mics and even their sleeves. The US has only two main political parties across the board. In India there are more than 60 big and small parties, all vying for power and for the loot. A vertical division of media in the US by bias is not the same as the devious manipulation by news channels as we see in India. The right-wing or conservative channels in the US too came up only in response to the biased, manipulative left-liberal channels. Fox News came up only as recently as 1990s and has been very popular with the conservatives. If the leftist Indian media doesn’t stop their manipulative ways then right-wing news channels will come up here too, and that wouldn’t be bad either.

The problem with Indian news channels is far worse than mere bias. The media celebs rarely touch upon the epidemic of “paid-media” and other media crimes. Recently, a channel has even been accused of blackmail with a sting operation. Now who is to say which channels are not guilty of such crimes? As for Barkha, there is no real need to justify bias. A prominent panellist recently told me: “When I want the Congress viewpoint on issues I just turn to NDTV, it’s a lot easier”. You see, she might feel Coleridged. It’s a reference to the “Albatross around the neck” she carries; that of Radiagate. It’s from a poem by Samuel Coleridge. As an English-literature expert I’m sure BD is unlikely to have missed that. That’s probably the reason for her frequent anguish over accusations of bias or her persuasions and “imaginary abuse”. What would be considered a “bite” by Barkha in India is just another Bark in the USA.

“A second-class mind dealing with….” is a quote from famous British Political Scientist Harold Laski.